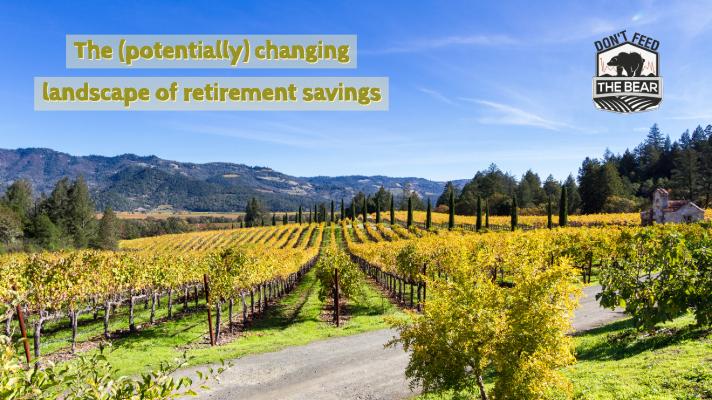 Something that we often hear is that “retirement will be a thing of the past”, that “without a pension, it is impossible to obtain the income that I’ll need in retirement”, or “small businesses don’t have enough incentive to offer competitive retirement plans”. These are common concerns since the number of companies that offer pensions have declined and many people question the sustainability of Social Security. Concerns over Social Security are as high as ever, so Clint and I recently discussed the findings of the 2018 Social Security / Medicare Trustees Report in a recent Gimme Some Truth podcast. But Social Security could be an entirely separate blog post! I’m here to write about a bill that I have been following that might address some of these concerns around retirement.

I recently read an article, which I decided to share on LinkedIn, that is following a bill called the Retirement Enhancement and Savings Act (RESA). Invesco describes RESA as a “bipartisan retirement savings bill”. If the bill were to be signed into law, it’s current provisions would affect 401(k) plans, IRA contributions, and other savings vehicles. Here are some of the things that could potentially change [thank you to Anne Tergesen from the Wall Street Journal for reporting the latest on these proposed changes].

Plan sponsors (employers) would be required to provide an estimate of the monthly income that a participant’s balance would provide if annuitized. The idea is for the employee to think more about the amount of income that they need in retirement. Knowing the amount of income one needs is typically easier to understand than the notion of “if I save $1,000,000 I should be able to maintain the lifestyle that I currently enjoy”.

RESA is proposing to eliminate the age (70 ½) at which a person can no longer contribute a deductible contribution to a Traditional IRA. People are generally living and working longer; this change would allow then to have the opportunity to reduce their taxable income and save for retirement past the current age limit for a Traditional IRA contribution.

Graduate students, which are abundant around Madison, WI, would be able to utilize their taxable stipend towards an IRA under the proposed changes.

The bill proposed a “universal savings account” which would be less restrictive than retirement accounts such as an IRA. Tergesen reported that employers could be allowed to automatically enroll employees into emergency savings accounts. This auto-enrollment (note that employees would have the option to opt-out of the program) would encourage employees to protect themselves if they were dealing with an unexpected financial burden. This is commonly referred to as an “emergency fund”, and we encourage all of our clients to have one!

I’ll reiterate that this post is based on proposed changes. RESA is definitely something that I will be keeping an eye on because it could affect the way that people save for retirement and how businesses encourage their employees to do the same.